First off, I don't know how these worked before I got a hold of it, since all of the lighting was missing.

anyway, on my 97 fzr600, I installed an integrated LED tail light and front and rear led marker/turn signal lamps.

First of the weird:

The second weird problem:
Fast signal flashing....I know, replacing filament bulbs with LED's will do that. But even with resistors across the signal circuits, they flash fast. I've even gone to the point of temporarily wiring in resistors and extra filament bulbs just to see what it will take to slow them down. It took a headlamp bulb in the circuit to finally slow them down...but that sucked so much juice, the LED no longer lit up 100% and you could see the the bikes headlamp flicker at the same pulse rate as the signals.....

something crazy going on here. All ground test good with my multimeter as well as the power wires.....it's almost as if something is bleeding across circuits or feeding back through.

What do you mean by "across"? Sounds like you've made a mess there and connected the resistor in parallel with the LEDs instead of in series. 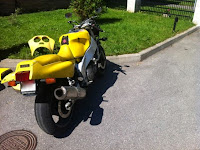 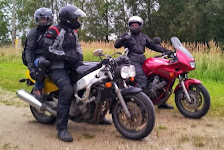 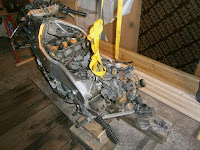 To reduce voltage= wire in series

That goes for just about any DC circuit, regardless of it's components.

I think 25 years as an auto tech is experience enough to know how a simple circuit works.

Sorry, I completely misread your post and thought you were using plain LEDs, not a proper light cluster.

My thoughts exactly,LOL.....I have a 4 pin LED relay on the way to wire in in place of the factory flasher module.

It shouldn't be too hard to wire up. Four wires: Ignition +, Ground, signal, output. Really not too much different than the factory flasher except it doesn't have the speed cancel circuit.(which I'm not using anyway)

Looking over the wiring schematic for the FZR600 turn signal circuits and looks as though I can get away with a 3 wire LED flasher. Even though the 4 wire one I have will also work, I just won't have to use one terminal.

What I don't get is what the Yellow with red tracer wire from the OEM flasher that goes to the turn signal switch does? It looks as if it is switched to ground. if that wire isn't needed to operate the new flasher, it should work out just fine.
97 FZR600 Thunder rat?
97 GSX-R750
Top

DonTZ125 wrote:That's the trigger wire that tells the self-cancelling circuit to start the timer.

So that means.... no longer needed!

Offtopic: What models/years have the self-canceling circuit?

My 97 has/had the self canceling circuit...

I have components en route for a very simple plug-in dash-flash healer. Pricing to be confirmed, available in 2-3 weeks.